It doesn’t matter what art looks like, but how it’s used.
–Franz West 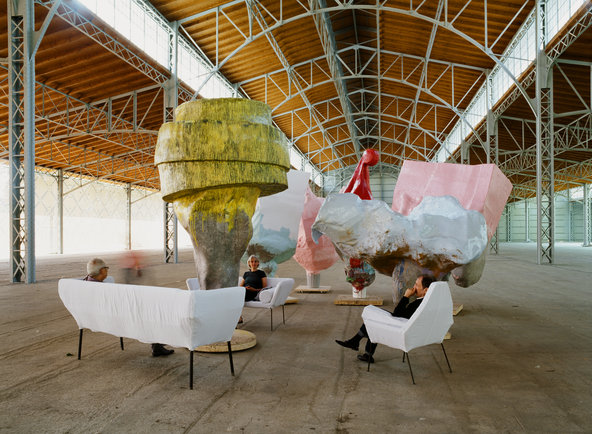 Franz West is an Austrian artist whose work began as a reaction to the Action and Performance Art of the 1960s.  Instead of making objects to be viewed, he created sculptures to be touched.  His “adaptives” were sculptures meant to carried around the gallery, so that viewers could observe how they “adapted” to their bodies.

More recently, West began creating “adaptives” of a different sort – this time they took the form of furniture.  In his chairs, couches, and light fixtures, West blurs the line between furniture and art.  I like how his efforts pay off – art objects become familiar to the viewer on a more personal level, though they always maintain the presence of a sculpture.  One of my favorite pieces is his floor lamp (below) made of rebar topped by a bare lightbulb.

West’s furniture, like his sculptures, have an awkward and sometimes grotesque appearance.  But at the same time, they are surprisingly elegant and beautiful.  Take a look.  See how they change the way you look at furniture.