I love architectural drawings, especially historic ones of the hyper-realistic variety.  So you can imagine my delight when I came across the work of Matt Woodward, a contemporary artist whose drawings are inspired by historic examples of architectural ornament.

Much of Woodward’s work is a reflection on Louis Sullivan, the famous Chicago Architect who coined the phrase “form follows function” and was responsible for such buildings as the Chicago Stock Exchange and Carson Pirie Scott Department Store.  He became famous for using elaborate ornamentation on the surface of his buildings.

Matt Woodward’s large drawings capture the massive scale of Sullivan’s architectural ornament, filling the walls of even the largest galleries.   At first glance, I thought the drawings were made with charcoal rubbings – but it these pieces were in fact meticulously drawn by hand using discarded construction materials.

(above: detail of a drawing by Matthew Woodward, below: detail of Louis Sullivan’s ornament) 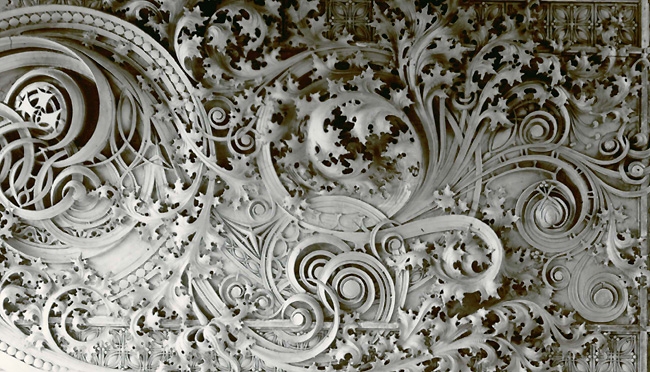 It is fascinating how these drawings seem to conduct the space around them with their architectural scale.   The Ritz Carlton Residences in Chicago apparently liked this effect, and recently commissioned a series of drawings by the artist (below):